A Guide to Esports – More Than a Game

As this year marks the inclusion of esports in the Commonwealth Games, we’ve created this guide to esports to help you understand what they are, why they’re growing in popularity, and if there’s any safeguarding risks to children and young people. We also understand that a topic like esports brings along new terms and concepts – so we’ve also developed a list of buzzwords to help you understand terms associated with the world of esports.

Esports (or electronic sports) are best understood as competitive-level online videogaming. Esports players compete against each other for prizes, money, and prestige.

Any videogame with the potential for competition can become an esport – from sports games (e.g. FIFA) to first-person shooter games (e.g. Call of Duty) to card collecting battle games (e.g. Hearthstone).

Esports can be team-based or solo experiences. They require training, skills, and time. Teams have coaches, sponsorships, and friendly matches for practice (called ‘scrims’) before competitions. The games themselves are designed to be immersive and to encourage players to become the best, with in-game rewards and achievements awarded to higher levels of skill.

💭 Team Liquid’s League of Legends squad reported a gruesome training schedule for upcoming competitions – up to 50 hours per week!

Games that the child or young person in your care may be playing daily, such as Fortnite, Rocket League, and Overwatch, have cemented themselves in the esports scene, hosting tournaments and causing some professional players to gain celebrity-like status. There are clubs, such as Manchester City, who recruit players. Even celebrities, like David Beckham and Drake, co-own esports organisations. Shaquille O’Neal invested $155 million in the Sacramento Kings-owned esports team.

Esports are fast developing and gaining more momentum each year, with the industry growing in value by 8.5% every year. Young people can now choose esports as a skill for their Duke of Edinburgh Award and even gain a BTEC qualification in the subject.

Discord communities for games can also host and promote private tournaments, especially with so many games like Fortnite introducing custom modes where players can create their own matches.

🎮 A study by YouPoll (2022) suggests that participating in esports increases the development of teamwork skills, communication skills, problem-solving, and confidence in children and young people which translates to their daily lives.
🎮 Almost half of parents believe esports should be added to the school curriculum and two-thirds think that esports should be offered as an extra-curricular activity.
🎮 On average, children between the ages of 11 and 18 play esports for three and a half hours a day, either at home (94%) or at a friend’s house (40%).
🎮 The first ever esports tournament took place at Stanford University in 1972, as 5 students went head-to-head in the ‘intergalactic spacewars olympics’. However, the event was referred to as a ‘gaming tournament’ and the winner received a prize of a year’s subscription to the Rolling Stones magazine.

Remember trying really hard to erase the name at the top of the list on the Pac Man machine at the arcade? Or perhaps getting sweaty hands at Street Fighter? The competitive nature of games that sparked friend-versus-friend matches and sibling rivalries is what esports is built on.

Esports may have been around for a long time, but their recent rise in popularity can be attributed to livestreaming on platforms like Twitch and YouTube. With the rise of streaming and influencers, many young people look up to esports professional players like they would a football player. Professional players are often also content creators and livestream the game they compete in during downtime, training time, and online tournaments. Livestreaming has helped expand esports as a legitimate career option or goal for young people.

The child or young person in your care may already participate in esports amateur tournaments regularly, either with friends or by getting matched up against other players online. For example, Rocket League hosts tournaments everyday where players can compete for in-game rewards. Amateur tournaments are often advertised on the games themselves. Some tournaments host events for amateur teams to compete for a chance to play against the pros in professional events.

Like traditional sports, esports have a spectator element to them in which fans watch tournaments and matches, support particular teams, and admire certain players. Esports tournaments can range from small-scale events aimed at amateur enthusiasts or large-scale events for professional teams sponsored by game publishers.

Despite ongoing debates, the correct way to write esports is ‘esports’, according to the AP style guide (the American-based go-to English style and usage guide for journalism and news writing). The term was first published in 1999 but has since been confirmed to be written as ‘esports’ in 2017.

Dota 2’s ‘The International’ tournament is consistently one of the largest esports events every year, selling out stadiums and boasting a $34 million (£25.8 million) prize pool.

Smaller-scale tournaments aimed at non-professional players. These can be both official (hosted as an event) or as a feature of the game itself (incorporated into regular gameplay).

Larger-scale tournaments aimed at professional players, often with a cash prize, multiple rounds, and sponsored by organisations (for example, electronic companies such as Lenovo).

What are the Risks of Esports?

In this guide to esports, we want to outline what the possible risks associated with esports are to help you keep the children and young people in your care safer when they are watching and/or playing esports.

Games may contain inappropriate or distressing content which a child or young person could be introduced to through watching or by playing. This could include violence or inappropriate language.

Most games have a form of loot boxes (in-game treasure chests) for purchase, which could result in unhealthy spending habits, especially when boxes offer competitive advantages. Children and young people may not understand the mechanics of gambling (like risk and reward) and this increases chances of possible exploitation. Go to our article on Young People & Gambling in Games to learn more.

Esports are played by people of all ages all over the world. When playing team-based games, the child in your care could match up against strangers in a team. This could create a potential environment for grooming (when an adult builds a relationship with a young person based on trust and connection to manipulate, exploit, and abuse them).

While playing online, there is a risk that gameplay sessions move across platforms (such as using Discord for voice chat). It is also likely that young people may want to follow their favourite esports teams and players on social media and engage in discussions with other fans. This could make it easier for strangers to contact them and introduces more avenues where abuse could take place. There is also a danger that platforms may be end-to-end encrypted, a system that keeps interactions between users private and therefore not accessible to law enforcement.

Practicing and competing in tournaments requires a time commitment. This could interfere with schoolwork, sleep schedules, and family routines. It could also introduce added stress if a young person is using all their free time to engage in training and competition, without leaving time to relax by doing other things.

Much like traditional sports competition, especially in a team setting, there is a chance that a bad match could frustrate a child or young person playing the game. They may also get upset if their favourite team doesn’t win or perform well. This could result in negative emotional reactions such as outbursts, sulking, or fixation.

Esports lack an overarching authority body like those in traditional sports, such as the Union of European Football Associations (UEFA) in football. Bodies, like the International Esports Federation (IESF) are still in the early stages of attempting to introduce global regulation standards. This is problematic because there are no standards for accountability and a disparity in rules and requirements for competitions.

It is common for pro-players to be sponsored by companies, like energy drinks such as G Fuel or Glytch Energy. Popular creators often have ‘signature’ flavours aimed at their fans and promotion codes that are constantly advertised on streams and social media. This could influence a child or young person to want to buy these products despite potential dangers of excessive caffeine intake.

For more gaming resources, check out our round up blog here. You can also watch our  video on loot boxes on our Safeguarding Hub & view our lesson on PEGI ratings on our Home Learning Hub. 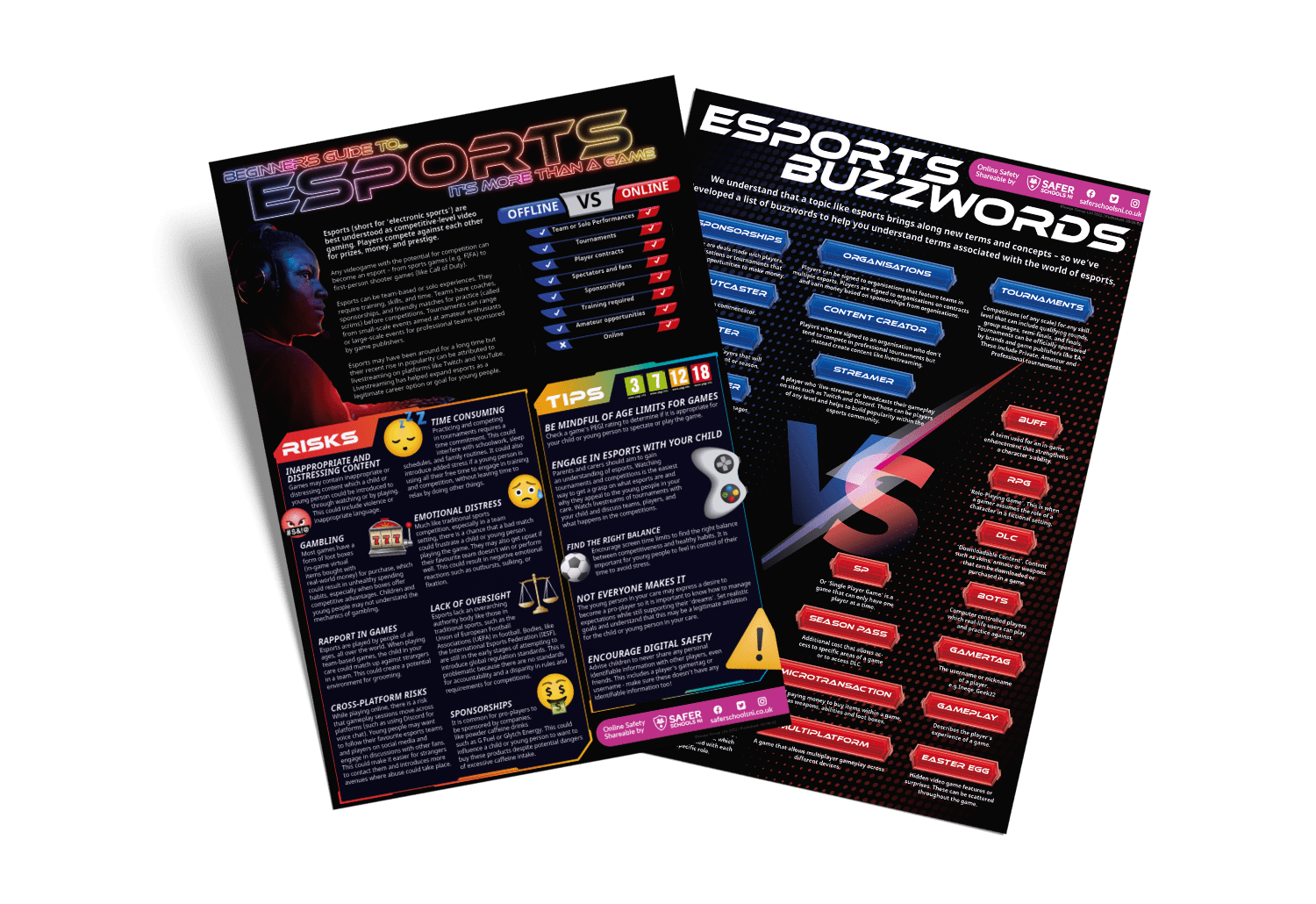 The Wait and Worries of Exam Results Day: How to Help Young People Prepare and Process

A Guide to Esports – More Than a Game